A short-story. (No illustrations, Sims or otherwise)

A short-story. (No illustrations, Sims or otherwise)

Harokar: I’m not asking you any… any details, but I need to know honestly –  what you told them.

Fav: I never thought you’d come for me. Not that you’d let me down – I thought it was impossible.

Har: It would have been but for Nerena. And I’ll tell you straight away, she hasn’t returned and most likely won’t.

Marsol: I brought your spare clothes.

Mar: Is it about Nerena?

Mar: Did you really allow her to come with us in disguise?

Mar: Why didn’t you tell me?

Fav: It was a stupid and selfish thing to do. And you’d have told me so.

Favin: Val, I should have said this earlier. But when – I thought… I knew… I wouldn’t live to… tell you… The Lord gave me another chance. And at what a prize. I’m so sorry. I just need you to know. I love you as woman and as a friend and as a human and as a soul.

Valea: Are you… serious?

Fav: I’m so sorry, never wanted to scare you.

Val: You couldn’t possibly scare me any worse than you did those past few days.

Fav (whispering): Do it.

Fav: Greio – I know you think you owe me your life. Stop that. We’re even. I owe you one, too.

Gre: You see, Kaana, this whole concept of debt, it doesn’t work. I know, shouldn’t be mad at Favin – it wasn’t his fault really. But I couldn’t bring myself to forgive him. I was glad when he was sent home to try and recover enough to be of any use again. I’m still glad I don’t have to see him – or his wife for that matter.

Gre: And this is my story. Do you still want to be part of it?

Ka: But I already am.

The plan had been to ride away in all directions, and later reassemble at several fortified places of the Order. By the time I could think of going back, I had no idea where I was. It took me most of the night to find the route my group had been supposed to take.

When I finally arrived at the fortress, I tried to find someone to report to. Harokar had just gone to check on Favin, and some idiot thought it a smart idea to send me after him.

The only indication that Favin was still alive was that they’d have folded his hands, had he been dead.

“If you want to…” The fact that Val barely comprehended the question should have been a warning sign.

For a moment I felt sure Harokar would yell at her, but then he only sighed and said: “You’d better bring your interpreter round. Dealing with you unaided is beyond me.”

“Hey Fav. Don’t even think of dropping off now. It’s been a hell of a mess to get you back.”

With an even deeper sigh he turned back to Val, picking his words carefully.

“When he’s in any state to answer when spoken to, please send for me, will you?”

In turning to the door Harokar noticed me standing there.

I could tell he was relieved to see me, but the only thing he wanted to hear from me right now was a concise report.

So I blurted out:

“Sorry for the delay, I was separated from the group as my horse was killed.”

“No!”, Val screamed. I never thought she could react to anything so noisily. “Say that’s not true! I trusted you!”

“Val, I’m sorry…”, I began feebly, but she slapped me anyway.

“Shut up!”, she yelled, “Leave me alone, I hate you!” Which was the last straw concerning my own temper.

“Well, I’ve been out there and got you Favin back”, I hissed. “You can’t have everything.”

At which she gave an unarticulated cry and tried to hit me again, but Harokar had by then recovered his wits and grabbed hold of her.

“Val?”, Favin said suddenly, in a voice so hoarse it barely sounded like his own. “Don’t tell me you’re here. Not you. Please please don’t.”

Much later it occurred to me, he probably thought he was back in that guardroom.

Val had snapped back into her quiet self, but was shivering all over. “Whatever else am I supposed to tell you?”, she faltered.

At this moment Maran walked in to inquire about the noise, and seeing me standing there said: “Oh, if Greio is here, it’s only Nerena who hasn’t returned.”

That’s when realization hit me. There was even still hope at that time, but somehow it came home to me that I’d lost Nerena.

It’s always the same with pain. There’s that second you’re staring at the wound thinking “Oh fuck, that’s gonna hurt” And then you have a few seconds of thinking you could handle it, which is really your time to get to safety before it takes over completely.

I barely managed to get myself out of that room. I felt like I couldn’t take another step, lift so much as a finger, think another thought.

At first all went according to plan. We could hear the sounds of battle as we rode around to the back of the settlement.

It wasn’t difficult to force entrance. Once we were inside, nobody took notice of us. We were just another unit hurrying along the narrow pathways, supposedly to meet the attackers at the gates. Nerena led the way, and she had done a good job spying.

I wouldn’t even have recognized Favin. Not from the distance and possibly not even close up. We picked him up as we had practised in training and made our way back to the horses. At this point we had been noticed as intruders and a handful of people who were not at the gates tried to stop us.

At the same time, the first organized strike against Heskar’s fake attack took place and he retreated, which distracted attention enough for us to get to the horses.

I still don’t know what happened exactly. Either the Burgus had sent riders in pursuit of us, or they were going after Heskar’s men, or it was an independent band of riders who were just trying to get somewhere under cover of darkness. In any case, they attacked fiercely.

We could only try to cover Marsol’s escape with Favin. For a while I knew Nerena was at my side.

Then two riders attacked me, one slashing my horse’s throat with his sword. I tried to jump off when the horse fell, but my foot was caught in the stirrup.

As I was struggling to free myself, Nerena put herself between me and the attackers. Now Nerena had no experience in sword-fight. She would have stood more of a chance with a bow, even this close. As it is, she attempted what she’d just seen done and it went wrong.

She did manage to stab one of their horses, and thereby got her sword wrenched out of her hand. The remaining riders went after her, the one now on foot attacked me. I could only try and defend my own life.

Nerena: No. Not for me. I only pray we’ll come in time. Find him alive.

Gre: Rena… Why did you do that?

Gre: Yes, but why? What makes you do incredibly reckless things for him?

Ner: Don’t come telling me you’re jealous! The second person I’m doing this for is Valea.

Ner: And anyway, the reason is that he brought me here. He gave me this chance, he believed in me. And now is the moment to prove he didn’t take me in vane. Isn’t that why you’re here yourself? Because you owe him?

Ner: And I’d do just as reckless a thing to save you.

[Author’s note: Real life has been busy lately, so backing up this story has dropped rather low on my priority list, and some mistakes happened when I did update here. This bit should actually have been in Scene 1, where I’ve added it now, so this is a temporary post]

Kaana: Greio – what have we done!?

Ka: But we failed those people. We’re knights of the Order, and they trusted us to get them out safely and we failed. How can we even go back and face the others after that?

Gre: It happens. To us like to everyone else. Marsol will be glad to see us back – though trying not to show it.

Ka: It’s not that. It’s… some weeks ago I’d have been with the villagers. I was – before. I know what’ll happen to them, and we were there to prevent it.

Gre: And two years ago I’d have been with the Capitol’s troops. Nothing to be done about what’s past. Don’t talk like Rena, please.

Ka: What did happen to Nerena?

Gre: Marsol’s right. That won’t cheer you up.

Ka: You asked me to stay alive for something that won’t even cheer me up?

Gre: I didn’t think that far. I just wanted you to stay alive.

Gre: There is such a thing as sacrificing more than the mission is worth. And I don’t want to do that ever again.

END_OF_DOCUMENT_TOKEN_TO_BE_REPLACED 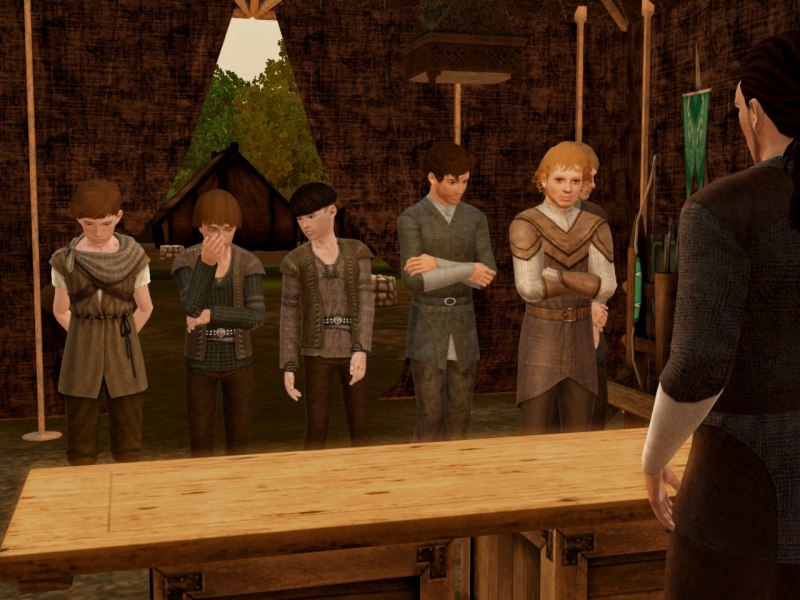